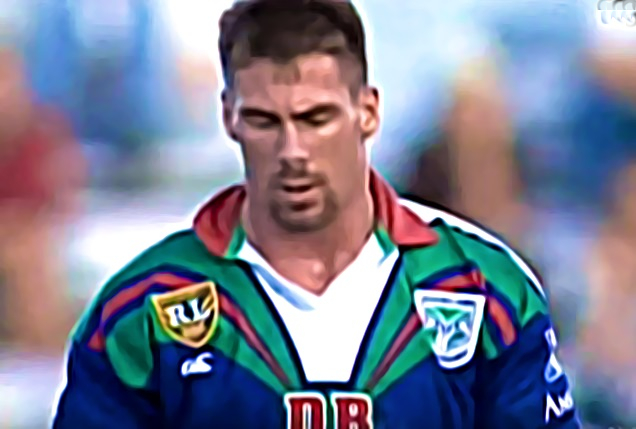 Ahead of the Warriors’ NRL Round 3 clash with Manly in Christchurch, we celebrate the connections between the Auckland-based club and Canterbury.

A trio of the province’s stars from the early-1990s golden era featured in first grade during the Auckland Warriors’ 1995 foundation season.

Robust three-quarter Whetu Taewa was the only ex-Canterbury representative to take the field in the Warriors’ 25-22 loss to the Brisbane Broncos in their epic premiership debut. The then 24-year-old, starting on the wing, set up the club’s first-ever try with a sideline bust and an offload to fullback Phil Blake, who dotted down for the history-making four-pointer.

The West Coast product joined Halswell in 1989 and played 37 games for Canterbury over five seasons, while touring Great Britain and France with the Kiwis in ’89 and ’93 to notch six Test appearances.

Taewa played 11 games for the Warriors in 1995, but left the club at the end of the season and played under Graham Lowe at North Queensland in ’96. He spent six further seasons in Super League with Sheffield and Hull KR.

Backrower Logan Edwards, formerly of Marist Western Suburbs and a Canterbury rep from 1988-94, debuted for the Warriors in Round 5 of the ’95 campaign and played 15 first grade games. He was set to join Hunter Mariners in 1996 but the court injunction preventing the Super League competition from going ahead that year curtailed the valuable veteran’s premiership career. Edwards played five Tests for New Zealand from 1993-95.

Hard-running former Addington centre/winger Mike Dorreen, who scored 30 tries in 43 games for Canterbury from 1988-93, toured Papua New Guinea with the Kiwis at the end of 1994 (although he did not play any Tests) before becoming a foundation Warrior.

Dorreen scored two tries in four first grade appearances in ’95, dotting down in victories over Cronulla and Gold Coast. But the competition for three-quarter line spots saw him spend subsequent seasons with Balmain (1996) – including a starring role in the Tigers’ 34-22 upset of the Warriors in Christchurch – and Hunter Mariners (1997). He made his club debut for the Mariners against Auckland at Mount Smart Stadium.

Canterbury stars Simon Angell and Jason Duff (who later played first grade for Wests Magpies) were signed by the Warriors for their inaugural campaign but did not receive a first-grade call-up, instead toiling away for the club’s reserve grade side that reached the finals under legendary former Canterbury coach and Kiwis mentor Frank Endacott.

‘Happy Frank’ drafted in his son, utility Shane Endacott, and fellow long-serving Canterbury rep Aaron Whittaker for the 1996 season. Whittaker previously had a stint at Illawarra and played for the Kiwis in 1993-94.

The pair combined in the halves as the Warriors went down 14-12 to Cronulla in that year’s reserve grade grand final, with captain Whittaker scoring a try and two goals.

Shane Endacott was blooded in first grade by John Monie early in 1997, while after Frank Endacott took over as coach mid-season Whittaker earned a one-game call-up to the top flight. But the presence of Stacey Jones and Gene Ngamu blocked Whittaker’s bid for a regular spot.

Whittaker again skippered Auckland in a reserve grade grand final loss in ’97 – this time against the Bulldogs – with Canterbury rep and Halswell grand final hero Glenn Coughlan lining up at fullback for the Warriors.

Whittaker played another seven first-grade games in 1998, one off the bench and six at hooker. Shane Endacott was a highly-valued utility, eventually playing 42 games at five-eighth, centre, hooker and lock before hanging up the boots in 1999 at just 28 to pursue business interests.

Frank Endacott finished as coach of the Warriors at the end of 1998 after the Graham Lowe-Malcolm Boyle consortium took over the club, leaving behind a modest record of 13 wins in 33 games – but his season-and-a-half tenure was hampered by myriad distractions within the club and around the game in general.

Endacott steered the Kiwis to famous wins over Super League Australia in 1997 and fully-fledged Australian Test sides in 1998 and ’99.

West Coast product Quentin Pongia, who debuted for New Zealand in 1992 while playing in Endacott’s Canterbury team and won a grand final at Canberra in 1994, left the Raiders for the Auckland Warriors in 1998.

Pongia, plagued by suspensions throughout his premiership career, played 18 games for the Warriors in ’98 but joined the Roosters the following season.

Sydenham Swans junior David Vaealiki slipped through the Warriors’ grasp around this time, with the hugely promising outside back instead snapped up by Parramatta.

Granite-like Canterbury prop Terry Hermansson spent six seasons with South Sydney and the Roosters – scoring a rare try against the Warriors during his second with the Rabbitohs in 1998 – before linking with Auckland in 1999.

Hermansson played 39 games for the Mark Graham-coached Warriors across two seasons. He wound up his four-Test Kiwis tenure in 1999 and represented New Zealand Maori at the 2000 World Cup.

Canberra-born Richard Villasanti played 96 games for the Warriors from 2001-06 and became the club’s first Australian Test representative. The renowned hitman also turned out for the Canterbury Bulls in the Bartercard Cup during his time in Auckland.

Junior Kiwi forward Kane Ferris earned a contract with the Warriors for 2004 and became the first Canterbury product to make their premiership debut for the club since Shane Endacott. The 19-year-old came off the bench for his solitary NRL appearance in a loss to the Adrian Morley-inspired Roosters.

Tough and versatile Corey Lawrie – best suited to hooker or lock but also capable of playing in the halves – starred for Hornby and Canterbury for several years before landing a Warriors contract. Lawrie, aged 27, played four games for Ivan Cleary’s Warriors in 2007, coming off the bench on each occasion.

After a season with English club Doncaster, Lawrie returned to Hornby Panthers and scored tries in the club’s 2010 and ’12 CRL grand final wins. A Canterbury Bulls regular, he featured in the Panthers’ 2018 grand final loss to Linwood as a 38-year-old.

Canterbury’s greatest-ever export to the Warriors took the long route to the club before making a belated NRL debut in 2009.

Riccarton Knights product and Canterbury Bulls rep Lewis Brown had lower-grade stints in Australia with Griffith, Sydney Roosters and Balmain-Ryde before linking with the Warriors. The ultra-versatile 22-year-old cemented a regular spot in the top-grade 17 in ’09, frequently switching between centre, second-row and dummy-half.

Brown made his Kiwis debut in the 2011 Anzac Test – coming off the bench and laying on a try for fellow Canterbury product and international newcomer Matt Duffie – before scoring arguably the Warriors’ most famous try later that season.

Playing in the centres in the preliminary final against minor premiers Melbourne, Brown finished off a try set up by rookie halfback Shaun Johnson’s unforgettable cross-field run to seal a grand final berth for the Warriors.

But after 84 NRL games for the club, Brown was lured back to Sydney by the coach who brought him into first grade, Ivan Cleary, and the Penrith Panthers in 2013. Brown racked up 15 Tests for New Zealand and retired after three seasons at Manly with 198 NRL appearances to his name.

Christchurch-born Pita Godinet played his junior football for Sydenham and Auckland club Richmond. The hooker/half made his NRL debut for the Warriors aged 23 in 2011 – also featuring in the Auckland Vulcans’ heartbreaking NSW Cup Grand Final loss to Canterbury that year – and played 18 first-grade games for the club over three seasons.

Godinet, a regular for Samoa at international level, has since had stints with Wakefield Trinity, Manly and Wests Tigers.

Ex-Northern Bulldogs hooker Sheldon Pitama played for New Zealand Residents 18s in 2013 and spent the following season with Melbourne Storm’s SG Ball outfit, before being snapped up by the Warriors NYC side ahead of their 2015 title defence.

Pitama was the junior Warriors’ captain in 2016 but has spent the past two seasons with InTrust Super Cup outfit Redcliffe Dolphins.

Born in Christchurch, Jazz Tevaga first pulled on a boot for Burnham Chevaliers but played the bulk of his junior football in Auckland before progressing through the Warriors’ lower-grade ranks.

The hooker/lock made his NRL debut as a 20-year-old in 2016 and posted 11 appearances in his rookie campaign but was only called upon four times in 2017.

The workhorse, who debuted for Samoa last year, forged a permanent spot on the Warriors’ bench in 2018, however, and was named Dally M Interchange Player of the Year as well as being widely hailed as one of the NRL’s big improvers.

Hornby halfback Tevin Arona, who previously played for Canberra’s Under-20s, and dynamic Linwood centre Matt Sauni – Canterbury Bulls teammates in 2015 – both turned out for the Warriors’ InTrust Super Premiership side in 2017.

Arona has made intermittent ISP appearances in 2018 while Sauni returned to Christchurch and the Keas. Arona followed at the end of last year, turning out for the Canterbury Bulls in their clash with the Warriors’ reserve grade side at the opening of the Ngā Puna Wai Sports Hub in February 2019.